I don’t want to be a Franchisor; Can’t I just grant a license? 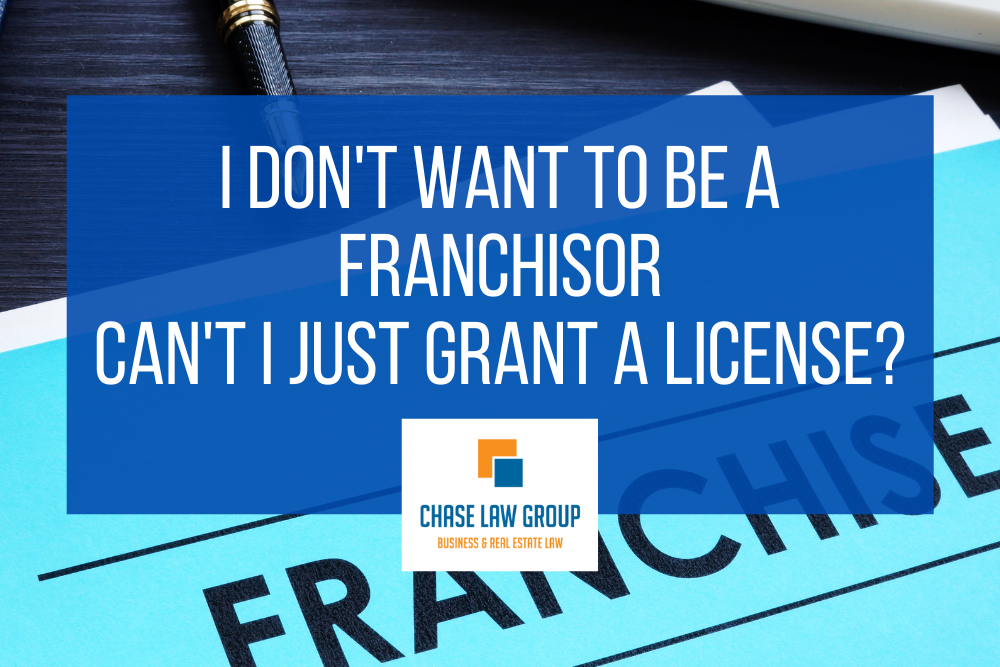 Frequently, clients will tell us they have a great idea that they would like to license others to operate. When we explain that they are proposing a franchise arrangement, we get the response, “I don’t want to be a franchisor; can’t I just grant a license?”

What is a “franchise”?

A franchise is a special kind of license. In general, all franchises include a license, but not all licenses are franchises. What’s the difference?

A franchise is an arrangement that normally includes three elements (there are exceptions in some states, but this is the rule in California and federally). We think of these as a “three-legged stool”—if any one of the three elements is missing, the arrangement is (probably) not a franchise. These elements are associated with a trademark (normally in the form of a license), payment of a fee, and the right to use an operating system. In a moment, we’ll review each of these, but first a note about the two main types of franchises.

It is generally possible to categorize franchised businesses as either “product franchises” or “package franchises.” When most people think of a “franchise,” they think of package franchises. These are arrangements in which the franchisor instructs the franchisee on how to operate a business, such as a restaurant (for example, McDonalds), a plumbing business (for example, Roto Rooter), or a fitness business (for example, Jazzercise). But another form of franchise is one in which a manufacturer sets up authorized resellers of its products, such as an automobile dealer or a gasoline service station; these are referred to as product franchises. The elements for each type are the same, but there may be more emphasis on one element or another in different businesses.

What is the “Trademark” element?

If a business is “substantially associated” with a trademark (or a service mark, logo, or other commercial symbol) identifying the franchisor, this element is typically satisfied. Note that the association must be “substantial”—it is not enough that a small portion of the products sold by a business contain a trademark; rather the business as a whole must be associated with the trademark. But it is also possible for a business to be associated with more than one trademark at a time; for example, an automobile dealer can be franchised by two (or more) different manufacturers.

If all association with a trademark is removed, the business is no longer a franchise—but it may be a “business opportunity” or “seller-assisted marketing plan,” if some slightly different elements are satisfied, so call us if you are thinking about proceeding that way. Also, bear in mind that one of the biggest benefits of any sort of licensing or franchising program is the association with a trademark; the trademark helps customers find the business, and provides assurance of what is being purchased. For instance, without the trademark and brand recognition, Pizza Hut basically just sold ketchup and cheese on toast!

What is the “Fee” element?

In order for a franchise to exist, there must be a fee paid from the franchisee to the franchisor (but who would want to license their trademark for free?). The fee can be paid in a lump sum, in periodic installments, or as a royalty. In general, every payment from a franchisee to a franchisor counts as a “fee,” but there are a few exceptions, such as if the total payments are lower than $500 per year, or if the payments are solely for purchase at normal wholesale prices of reasonable quantities of goods for resale.

What is the “Operating System” element?

Although worded differently under California law and federal law, the third element is concerned with whether the franchisor instructs or assists the franchisee in running the business. Oftentimes, this element is critical because it differentiates a franchise from a license. Much attention has been paid over the years in trying to explain this element; for example, the California state agency in charge of regulating the sale of franchises has issued guidelines that emphasize that businesses that are operated with the appearance of centralized management or uniform standards concerning the quality of the goods or services are likely to satisfy this standard.

In the same way, if you want to license your trademark to someone, have them pay you for the rights, and you are going to provide them instructions or assistance in how to operate their own business, then you are probably issuing a franchise—not just a license agreement.

If you are considering selling franchises (or considering buying a franchise), please contact us or call 310.545.7700 and we will be happy to work with you.